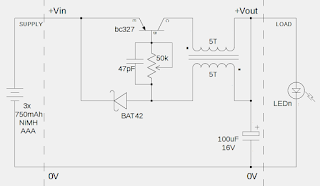 
The switching circuit operates at approx 67 kHz, in 2 half-cycles: a `Drain` step, followed by a `Recharge` step 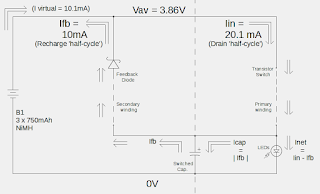 
The battery capacity can be characterised by discharging it using a resistor with a known value, over the terminal-voltage range 4.2V to 3.45V

When the discharge resistor is replaced with the preliminary circuit (ie. the feedback diode is connected to a spare battery which is not the supply battery, but similar construction) the quantifiable work consists of two parts:-
- converting 3105 Joules to illuminate some LEDs
- recharging the spare battery by using 4238 Joules of energy which is being temporarily stored in the circuit as a by-product of the oscillator operation

When the feedback diode is re-connected to the supply mode (see Fig. 1), the circuit will operate for almost twice the duration of the conventional, non-feedback mode - the circuit now operates for a total of 60.5 hours, whilst drawing the same real average power, 20.1mA at 3.86V,  (compared to 30.5 hours duration for the non-feedback mode) with the loads remaining the same values 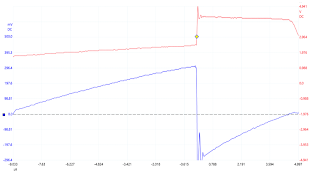 The total energy drawn by the circuit is now 16898 Joules

The efficiency of the oscillator circuit compared to its total energy drawn hasn't changed essentially:
the quantifiable work has increased to 14566 Joules, and these values give an efficiency of 14566 / 16898 = 86%

The system is recycling its input energy by a factor of 1.99

Although the total work converted by the switching circuit LEDs, on their own, remains less than the original supply of energy, and the energy converted by those circuit LEDs matches that of a passive resistor-driven LED arrangement (6159J vs. 6169J), the 'With-Feedback' current arrangement still enables the circuit to produce a level of light output slightly greater than the passive DC-drive arrangement (146 Ft-candles vs 140 approx.) but for approximately 34% longer duration (60.5 hours vs. 45 hours)

This resulting system behaviour provides a worthwhile gain, which has been enabled by the 200% conversion to system work (16898J) of the original store of energy in the battery (8504J)